"A journey of a thousand miles
begins with a single step."
-Some guy from those books with inspirational quotes

Hello, and welcome to The Voice of Highsec. My name is Salah ad-Din al-Jawahiri, and I am an Agent and Knight of the New Order of Highsec and its Supreme Protector, James 315, praised be his name, and an enforcer of the New Halaima Code of Conduct. It is my pleasure to see you here. 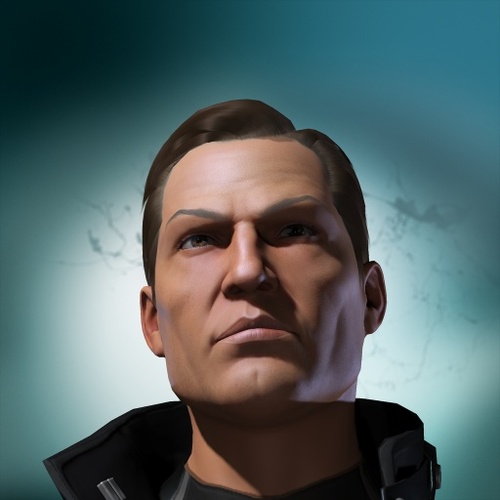 Obligatory portrait of James 315
Now that we’ve observed the protocol and got proper introductions out of the way, let me take a moment to explain what this thing is all about.

This blog and its first post are the result of great toil and lengthy procrastination on my part. Long overdue, too, because the idea was hanging in the air since last November, when Ascension finally hit the game. For the better part of my time in EVE, I have been a member of New Order Logistics, the oldest surviving corp of the CODE. alliance, which was initially designed as a way for our Agents to receive ganking Catalysts by means of contracts from third-party suppliers in any part of highsec. The concept never took off (it was easier for Agents to source their own gear according to their needs), but NOL stayed anyway, only to become the entry level ganking corp. Unlike our brothers in the legendary The Conference Elite, who have always been nothing less than extraordinary achievers, our corp is a more laid-back, casual, and roleplay-centered place with some of the finest keepers of the Code’s traditions at its core.

Quite a few players have performed their first ganks under my supervision. Some of them have become very prominent Agents and are now staging their own freighter fleets. Of course, with their drive to succeed, they would have done just fine without me, but I like to know that I’ve done my part. Whoever came to me, I helped them all. And yet, I still knew that ganking was not for everyone, not with the high entry barrier when compared to most other activities. Besides, other players’ trial or subscription time was not infinite, so I didn’t feel that it was a right thing to push people into actively saving highsec unless they had sufficient commitment.

It all changed with Ascension. With EVE going free-to-play, players have got a capability to create an infinite number of free accounts and use them at no cost until the end of times. And now it is my strong conviction that every conscientious highsec dweller (or any other EVE player, for that matter) must have a ganking alt at their disposal, since there are now zero reasons for anyone not to take a minute of their time to create a brand-new character without even having to compromise their existing characters and activities.

Unfortunately, all those who are new to the world of EVE Online are extremely susceptible to the ignorance of the general public about the New Order, bumping, and ganking. To make things worse, the public forums and chats are more often than not dominated by the kind of people who will be telling you complete nonsense with a straight face, while the more knowledgeable folks are usually more reserved in their judgment or simply are too busy actually playing the game. As enough people get trapped by those misconceptions, the myth about highsec ganking starts to propagate itself, bringing great harm to the community: people get too scared to undock their industrials and mining barges, to learn the game and, eventually, to log in at all. After all, if highsec is as cutthroat as all the defeatist anti-gankers claim it to be, then what are EVE’s less hospitable regions going to be like? What’s the point of getting better and exploring the game any further if all the established players will go out of their way to prevent you from succeeding?

In all honesty, with all the potential harm that these lies can deal to the playerbase, the GMs should punish them just like obscene language and real-life death threats. “But, Salah”, you’ll say, “when anti-gankers use obscene language and death threats, they don’t get punished for either!” Damn right, friends, so, once again, the New Order has to take the matter in their own hands. For years, we have been working hard to make the Code as comprehensible for all categories of players as possible, Rabe Raptor’s insightful “The Law of Highsec” page and Sasha Nemtsov’s brilliant voiceovers as just a couple of examples. Understandably, not everyone can study the lore of the New Order in its entirety overnight, so these condensed materials help to bring the Code closer to the people. In this blog, I will focus on systematizing the knowledge about highsec ganking for newer players and everyone else who could benefit from a comprehensive guide on the subject, both in order to get into ganking themselves and avoid getting ganked. I might also use it to post my own musings and observations about highsec, bot-aspirancy, and the Code. And tears, of course, since not everything I send ends up on the Minerbumping blog.

Why Livejournal, of all places? The answer is, I suck balls at web design. Even a single glimpse of HTML template editors makes me feel that highsec mining would be a more engaging task. Yes, I said that. Would have never believed it myself if I hadn't tried it. Hence, this dinosaur of a blogging platform. If you can help with a better alternative, feel free to do it, but don’t expect me to pay for your trouble.

And, of course, I’m leaving the comment section open to everyone as a free ground for discussions and shitposting, just the way it’s done by the Saviour. Our Agents never shy away from a debate – after all, why should we if we are always right?

I really hope that we all will have a really great time here and in the game together. Until our next meeting, and fly compliant o7